A German woman revealed on social media that she faked her own wedding and even hired a groom, in a desperate attempt to get back at her ex-boyfriend.

Sarah Vilard, 24, from Frankfurt, Germany, split from her ex-boyfriend in 2019.

Three months after their split, Sarah pulled out all the stops for an elaborate wedding day, even hiring an actor to pretend to be her groom.

Vilard and the hired groom were photographed celebrating their ‘wedding’ at the lavish Villa Kennedy in Frankfurt and Sarah even got her friends involved. 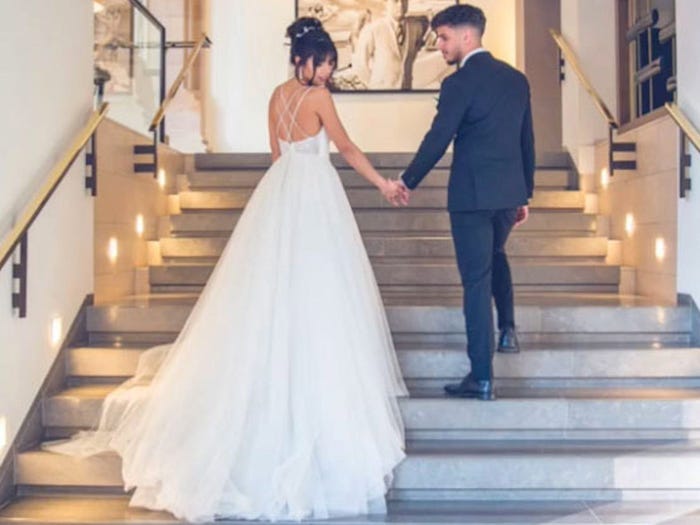 Sarah later shared a pictures of the big day on TikTok, leaving users impressed at the lengths she went to in a bid to show her ex what he’s missing.

In the video, the ‘bride’ can be seen wearing a stunning white wedding dress as she poses with her ‘groom’ and a friend.

Sarah’s ex discovered the news of her so-called wedding on Instagram after she posted photos of her big day, and unsurprisingly, he was more than a little bit shocked.

‘He found out through Instagram and texted me the next day and freaked out because he thought I was cheating on him while we were together,’ Sarah said.

‘That, of course, wasn’t the case. But he came to my house and wanted to talk to me afterward. I wasn’t interested.’

Sarah was left feeling ‘satisfied’ that her elaborate plan had worked and promptly blocked and deleted him from her social media and her life.

She said: ‘I blocked him everywhere and set my profile to private and removed the pictures.

‘Yes, I am single now and super happy about it. I’m happy to be able to focus on myself.’

Many people were shocked to discover that Sarah had spent so much money on the fake wedding, although she doesn’t want to reveal the actual amount.

‘But overall, I’ve had mostly good reactions and over 5,000 people following me.

‘I had fun planning this little project with my friends.’

‘This level of dedication is either completely psychotic or absolutely genius,’ one TikTok user wrote.

Another person encouraged: ‘Girl… what about the honeymoon? You have to go all the way.’

‘I personally see nothing wrong with this,’ one person commented.

Although not everyone was impressed, as one TikTok user added, ‘Lol, you’ve unlocked a new level of petty, congrats.’